On March 13, 2020 the world as we know it changed – businesses closed, doors were locked and sheltering in place became the new normal as a result of the COVID-19 pandemic. On that same day, Nathaniel Price had a new exhibition opening at Abigail Ogilvy Gallery in Boston, MA. The installation was impeccable, the show was documented beautifully–but no one would ever experience it in person. The work stayed up in the gallery with the hope to be able to re-open to the public at some juncture. Then, on April 14, 2020, a major water main broke nearby under Harrison Avenue. The street buckled, cars were swallowed, and water flowed throughout the South End neighborhood. It was as though the floodwaters were a physical manifestation of the fear that had begun to swallow the world. 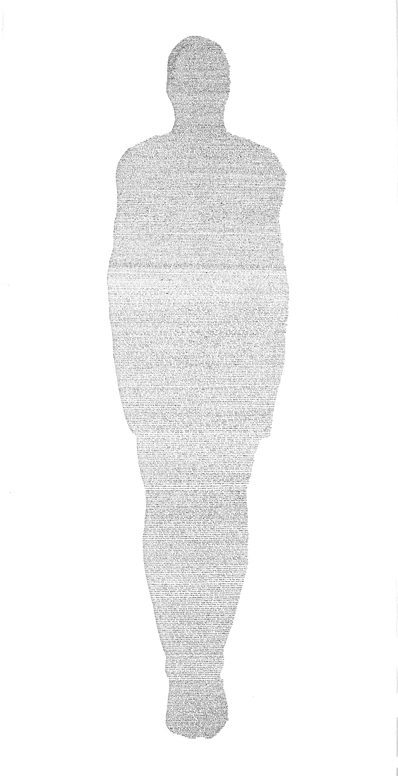 For the show, the Abigail Ogilvy Gallery is delighted to bring a series of four, meticulously rendered, large format, graphite on paper, As Built Drawings, to Boston. The drawings have previously been seen in San Francisco and at the David J. Sencer CDC Museum in association with the Smithsonian Institution. For each drawing in this series, Price formed a life-size silhouette with thousands of hand-drawn anatomical terms that are astonishingly placed in their correct locations in the body. Then, through the series, the outlines of the form fizzle, dissolve, and ultimately invert as the words are replaced with descriptions of processes that disturb the body with the inner form hollowed out altogether. Each drawing takes approximately 6 months to complete over hundreds of hours. Greg Flood of the San Francisco Examiner noted that “the potent mixture of visual beauty and dark subject matter combine in these drawings to stunning effect.” 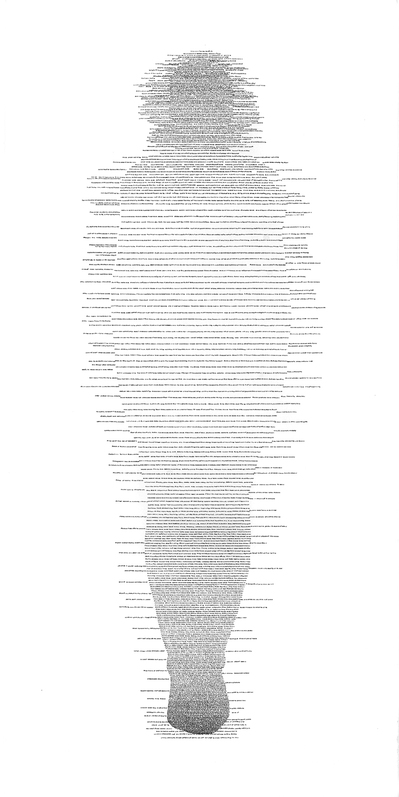 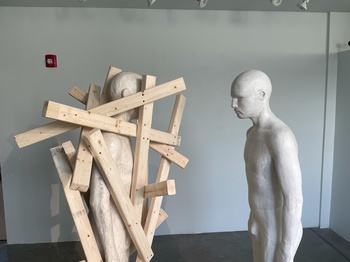 In Noise III and Noise IV, two life-size forms are wrapped in materials that both define and contain. In one, Price has written thousands of spelling words by hand over several years, creating a grey shroud over the head and torso. The piece underscores Price’s interest in the limitations of words and language as tools to understand the world and ourselves. The second figure, cast from the same mold, positioned in ‘conversation’ with the first is almost caged in a network of unpainted wood, purchased from the local hardware store and crudely screwed together. It is a figure boarded up like a house before a hurricane comes through town. 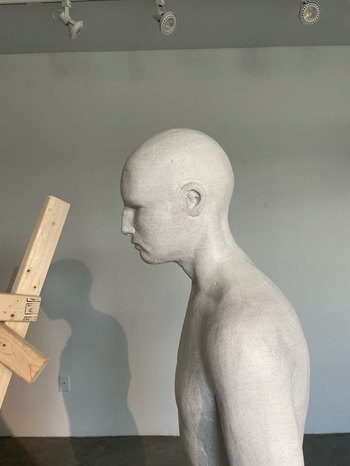 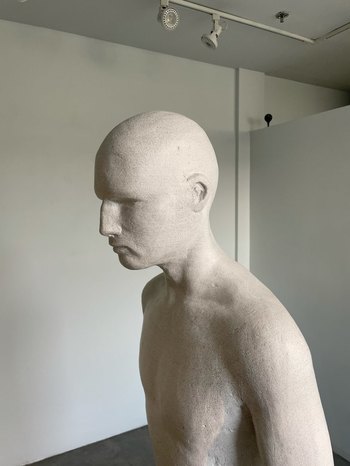 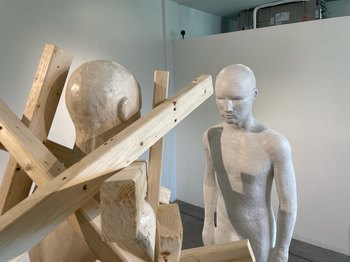 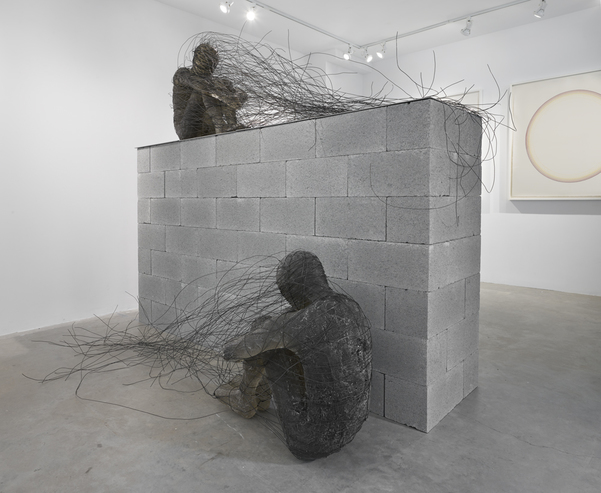 In Still III, IV, two life sized, crouching, resin-cast figures are wrapped in rebar tie-wire and separated by a 6 x 12 x 2 foot concrete wall. One figure is perched on top and one on the ground. The piece was installed during the Harrison Street flood in 2020 and, as a result, became partially submerged in water; the water-exposed wires are now forever marked with orange rust. The pieces are connected by similar form, but separated by posture, distance, materials and experience. 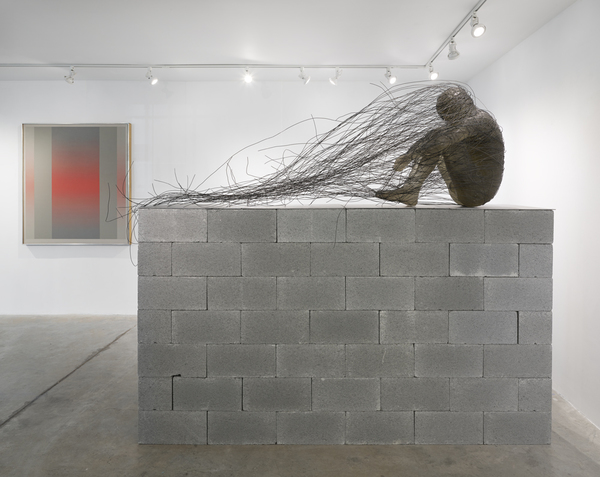 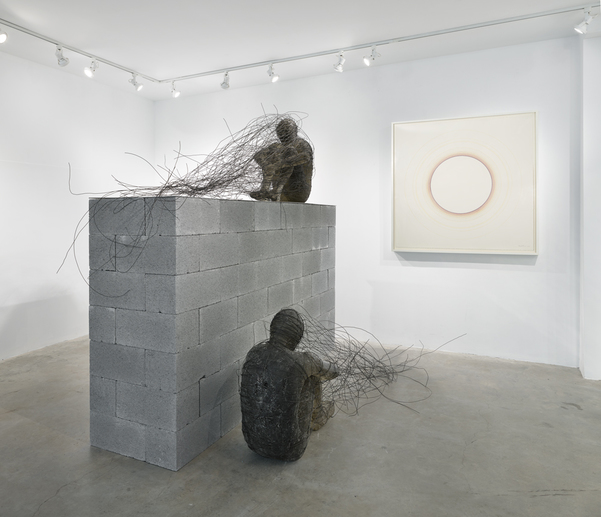 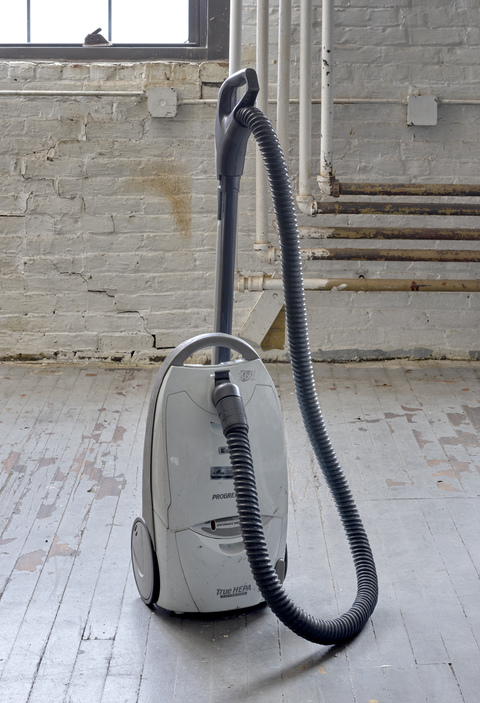 In 2018, a patient of Price’s with a history of substance use disorder saw him for a visit. He was doing well and was celebrating being 8 months sober and having a promising job interview scheduled for the next day. The following day, he did not get the job and told his partner that he was going to go home and clean their house which he liked to do in times of stress. Several hours later he was found at home, unconscious on the floor, having overdosed but with the vacuum still running nearby. Price was called to the hospital ICU that night to discuss end of life decisions with his parents, who were also his patients. The following day Price decommissioned his own vacuum and has not used it since. He includes the vacuum as a ready-made object to represent the feeling of that experience, with the oxygen being sucked out of the room for all involved. 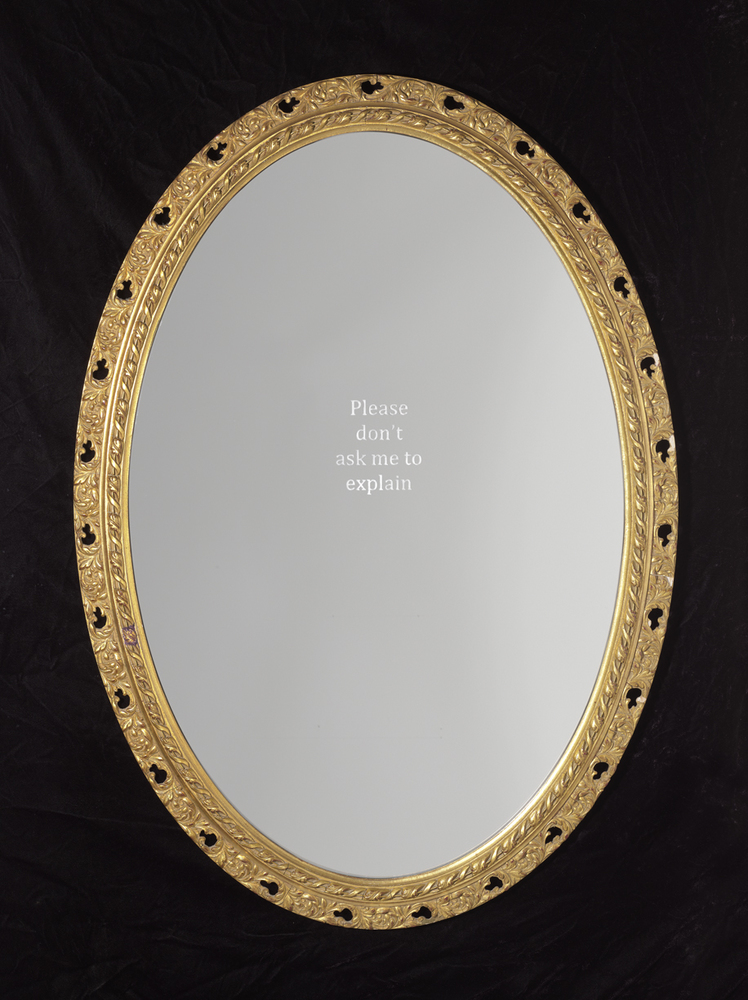 For this piece, Price took a mirror purchased at an estate sale in his neighborhood and used acid to etch the phrase, “Please don’t ask me to explain.” This phrase references a sometimes subtle, sometimes overt, resistance to explain ones thoughts or behaviors to others and the curious, and sometimes frightening, realization that you can’t explain your own behavior- even when looking directly into a mirror. 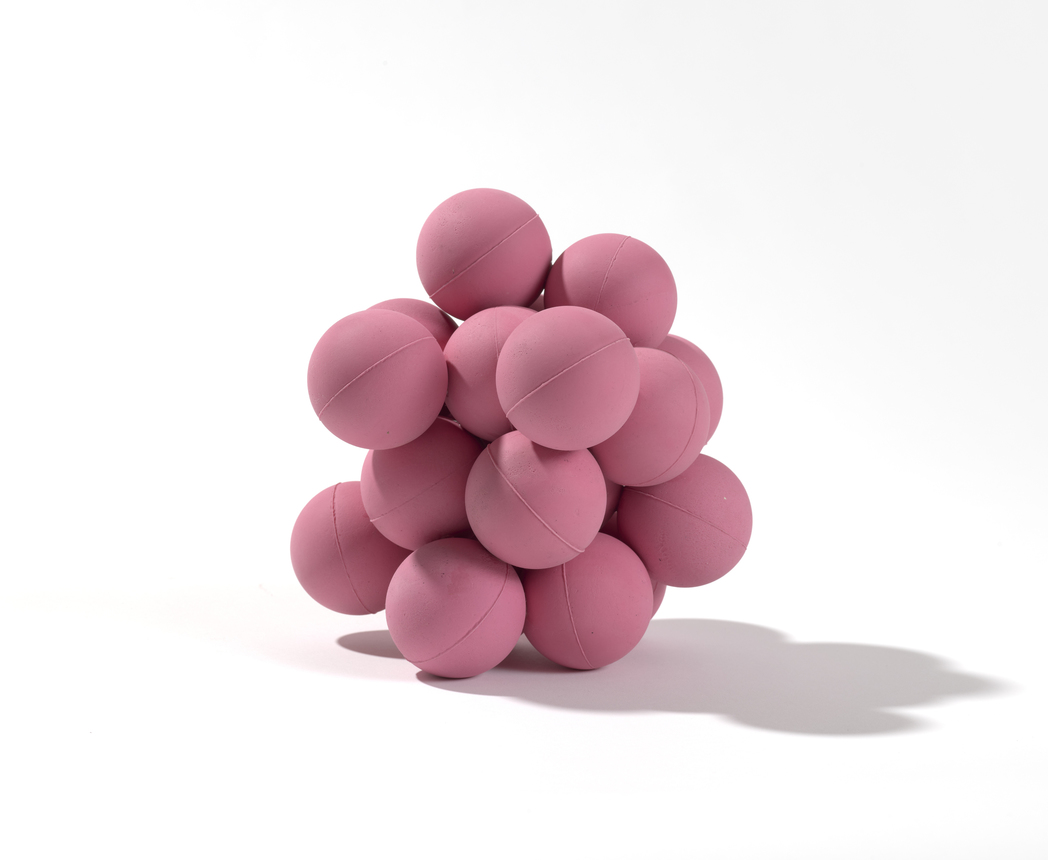 As a child, Price used Pinky balls while growing up in New York playing kick-the-can and stickball in the streets. They are lightweight, inexpensive, balls that are the imperfect, rejected, rubber cores of tennis balls that are sold rather than being thrown away. Price began building structures with them several years ago after reading about, and identifying with, their origins and subsequently becoming enchanted with their color and the visual associations with biological function, manufacturing and sense of play. 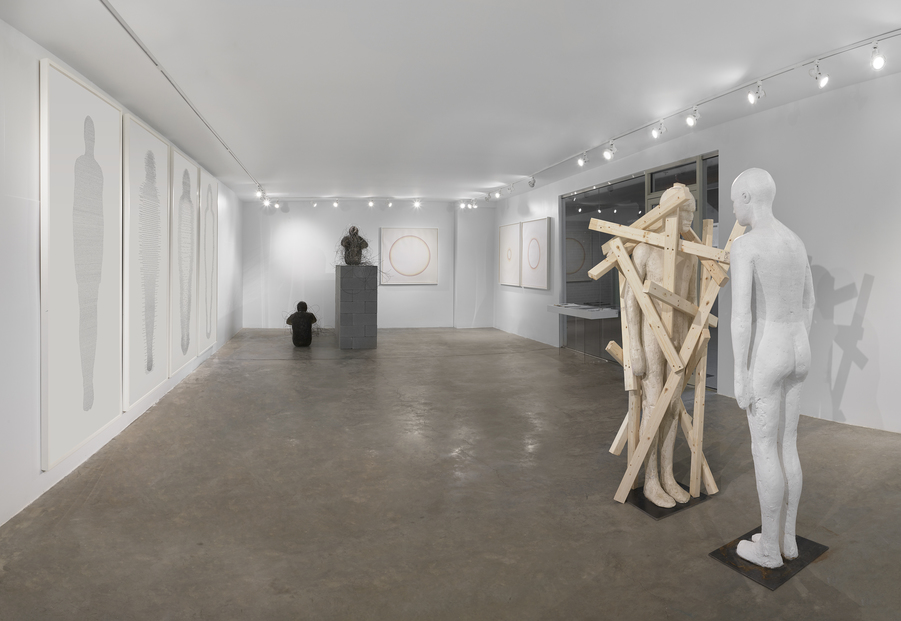 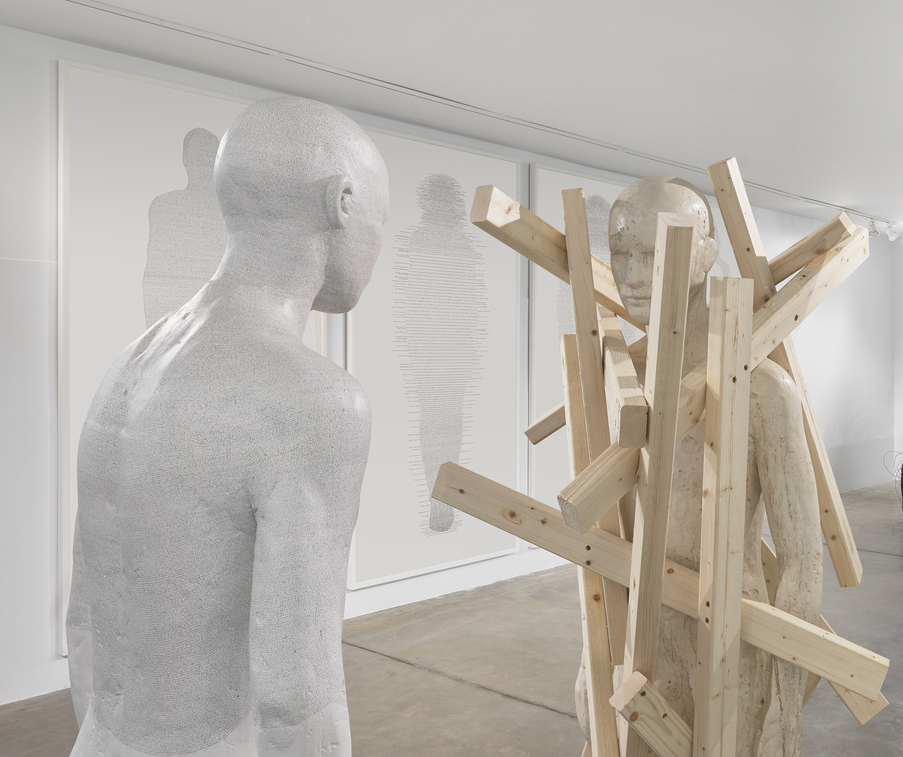 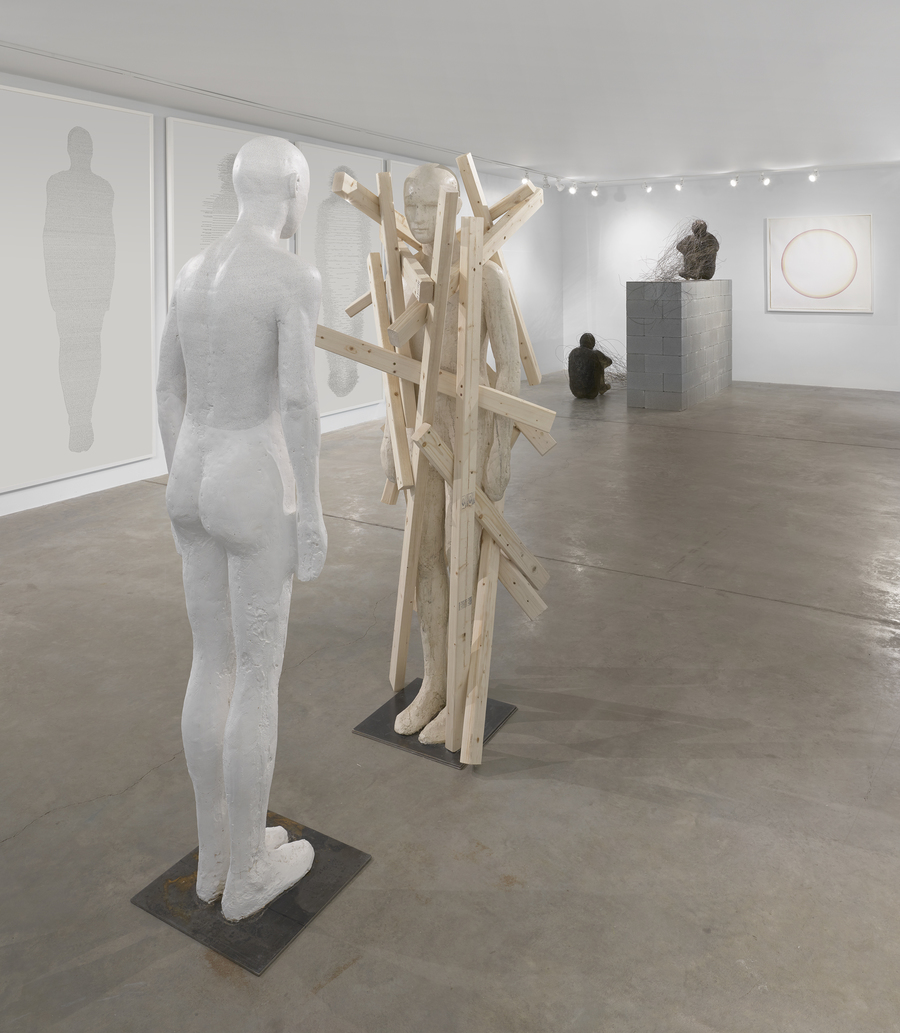