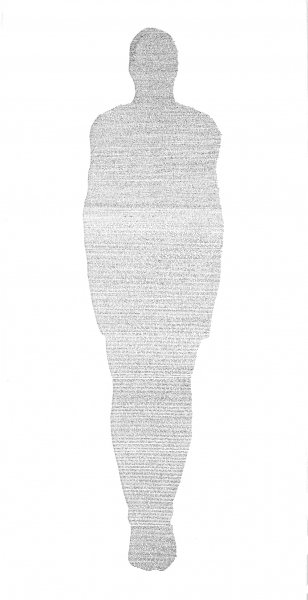 Each drawing in Nathaniel Price’s As Built Drawing series is a life-size human silhouette composed of small units. The use of small units is a recurring theme for Price, as for example in his Another Matter or Tylenol Cube (both in this volume). In this series the units used to construct the human form are words. They compose the muscles, arteries, veins, bones and nerves of the body, all meticulously and methodically placed in the anatomically correct location within the silhouette form. This is done by hand with an H density graphite pencil. Each drawing takes approximately 6 months to complete over hundreds of hours.

In the first drawing of the series, As Built Drawing I, Price establishes a flow of words in a series of precisely stacked ‘lines’ to create a mesmerizing whole. The form hovers within the center of a white void as a quiet revelation. It is a ghostly portrait of a body, but also an anatomical study-- in words. Its appearance evokes a sense of spiritual unhinging from the body and yet, when considering the meaning and placement of the words one can’t help but be drawn back to the corporeal and to the scientific.

The title of the series, As Built Drawings, refers to a genre of architectural drawings. They are often available in large red metal boxes attached to the wall of a building near a fire exit for quick access in the event of an emergency. There is one such box near the exit of Price’s studio in a 19th century brick factory building in Somerville, Massachusetts. These are not blueprints – which represent a kind of Platonic ideal for the building – but post facto records of the actual building process, which record the deviations from plan, and the imperfect compromise imposed by the construction process. The very existence of such drawings calls attention to the impossibility of perfect representation – the gap between life and knowledge which contemporary art strives to fill. Even 'as-built' drawings fail to capture the living changes that a building inevitably undergoes. Price's drawings seize upon this predicament by requiring his words to play both a structural and a semantic role – making a portrait but also a model of the body. These references become simultaneously more intense and ambiguous as the series progresses. The emergency for which architectural 'as built' drawings exist seems to afflict the body in the images, which dissolves and is hollowed out.

As the series progresses over six drawings the body undergoes what Price regards as a ‘stress’ with a subsequent concentration of resources to the vital areas of the body – as with the second and third drawings where the anatomical terms near the head, chest and groin overlap multiple times and emphasize these regions.

Later in the series, there is a significant shift in the system established earlier as the units/words migrate outside the perimeter of the body. When this happens there is a transformation of the content and meaning of the words from anatomically correct terms to the words of illness associated with that region of the body. By doing so Price returns to the reference of the "as built" nature of the relationship between the body, morbidity and mortality as a sometimes unexpected, yet unavoidable, truth.

As human beings, we can contemplate our own deaths, but don't often choose to do so unless we have a threatening physical or emotional experience or someone close to us dies. Occasionally, however, as with these drawings, one is touched by a work of art that elicits this awareness. What is all the more remarkable however, is that somehow, in the end, Price’s drawings, which wrestle with the darkest of themes, emerge with a subtle glow and the viewer is left with a work of substance, soul and light.